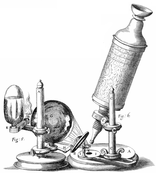 The first optical microscope and its inventor are not known, but an early version was produced in 1590 by one of two commonly credited eye glass makers, Hans Lippershey and Zacharias Janssen in the Netherlands. The name "microscope" is attributed to Giovanni Faber in reference to Galileo Galilei's compound microscope in 1625.


Probably the most well know early microscopy study is that portrayed in Robert Hooke's Micrographia, published in 1665. Hooke was the first person to refer to biological cells and used a compound microscope as shown in the image to the left.

The Start of Electron Microscopy 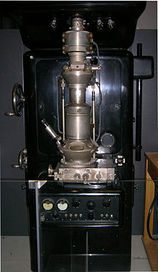 Scanning electron microscopy was demonstrated by Max Knoll in 1935 but was not commercially available until 1965when they were sold by the Cambridge Scientific Instrument Company as the Stereoscan.

"A Study of Tissue Culture Cells by Electron Microscopy," by Keith Porter, Albert Claude, and Ernest Fullam published in the Journal of Experimental Medicine, 1945, showed the first electron micrograph of an intact cell (shown below as an image montage). This began the science of biological electron microscopy, which has been expanded upon ever since.